An Ambitious Initiative for Generations to Come: Understanding the Width and Depth of China’s Belt & Road Initiative

On 10 November 2017, the Chamber of Commerce of the Grand Duchy of Luxembourg and the China-Luxembourg Chamber of Commerce (CHINALUX) held the fourth and final event in their co-hosted event series on China’s Belt & Road Initiative (BRI)*.  The BRI is an economic and foreign policy initiative, through which China endeavours to establish a network of intercontinental trade and infrastructure projects, with an aim to forge new economic corridors between China, Eurasia, and beyond. Entitled “What does China’s BRI mean for Luxembourg?”, the seminar focused on the opportunities for the finance sector in Luxembourg under the BRI, and emphasised the importance of grasping the ambition, width, and depth of the initiative. 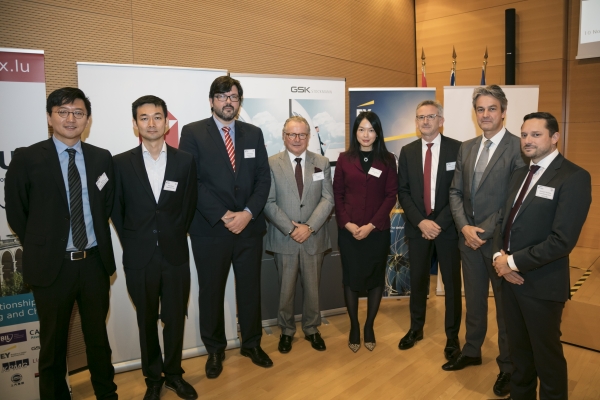 In his welcoming speech, Jeannot Erpelding, Director of International Affairs at the Chamber of Commerce of the Grand Duchy of Luxembourg, noted the on-going promotion of the BRI amongst the Luxembourg business community, and outlined the key China-Luxembourg government and business exchanges thus far in 2017. Most notably, he mentioned the visit to China by Xavier Bettel, Luxembourg Prime Minister, accompanied by Pierre Gramegna, Minister for Finance, and François Bausch, Minister of Sustainable Development and Infrastructure, in June this year on the occasion of the 45th anniversary of diplomatic relations between China and Luxembourg.

Continuing the welcome remarks, Dirk Dewitte, CHINALUX, President, outlined the previous seminars of the event series, noting that it’s been a challenging task to define the BRI throughout the series, as it has continued to develop and increase in scope since its launch in 2013 by Chinese President Xi Jinping. He stated that despite any confusions on the definition and scope, what has been clear throughout the event series is the BRI is a very ambitious initiative.

Next, Bo Ji, Assistant Dean of Global Executive Education & Chief Representative for Europe at Cheung Kong Graduate School of Business (CKGSB), delivered his presentation on the topic of the impact of the BRI to European financial sectors.** He reiterated Dirk Dewitte’s comment about the BRI’s definition, and argued the BRI could become the largest infrastructure project to date. Moreover, he discussed the importance of understanding one element of the BRI in particular, that is, “connectivity”, noting that the BRI currently involves over 65 countries, which account for 29% of global GDP. Additionally, the Chinese government anticipates its trade with the countries along the BRI routes will exceed US$2.5 trillion per year within the next decade.

A second key message in Bo Ji’s presentation was understanding the importance of the BRI for the Chinese government, as highlighted at China’s 19th NPC National Congress last month. More specifically, the BRI is strategically important for the Chinese government from a geopolitical and global leadership perceptive. Bo Ji then presented his thoughts on Luxembourg’s role under the BRI, within the context of the potential impacts to Europe more generally, namely for commercial banks, private banks, the fund industry, and the stock exchange.

Following Bo Ji’s presentation, Sascha Bremer, Luxembourg for Finance, Market Intelligence Advisor, led the panel discussion, and brought the views of senior representatives and industry players in the Luxembourg banking, fund, stock exchange, and FinTech sectors on the potential opportunities under the BRI to the forefront.

Lyu Ke, Bank of China Luxembourg, Deputy Head of Corporate Banking & Director of Chinese Corporate and Acquisition Finance Division, noted the support of and for Chinese banking in Luxembourg within the context of BRI cooperation. Similarly, Yves Maas, Luxembourg Bankers' Association (ABBL), Chairman, noted that Luxembourg offers a complete ecosystem for financial services, and as such is the ideal hub for Chinese banks to enter the European market and beyond.

Michael Pechner, Luxembourg Stock Exchange, Chief Commercial Officer, expressed that Luxembourg and the Luxembourg Stock Exchange can potentially boost BRI finance, for example, by offering access to investors, credibility, transparency and reliability. He noted that given the track-record of Luxembourg, for example in the supporting of the internationalisation of the RMB, it’s clear Luxembourg can play an important role for the BRI. Similarly, Camille Thommes, Association of the Luxembourg Fund Industry (ALFI), Director General, noted that Luxembourg has been a front runner in supporting many initiatives. He also echoed Bo Ji’s reference to “connectivity”, stating that Luxembourg connects the world, and indeed has an interest to act as a connecting hub.

Turning the focus to FinTech, Ning Wang, PingPong Europe, Co-CEO & PingPong Financial Group Companies, President, explored the importance of FinTech for the BRI, and called for Luxembourg to be the next Hangzhou. When asked whether he views Luxembourg, or his company and other companies in Luxembourg, as playing a role in the BRI, he responded, “yes, absolutely, that’s why I’m here.”

Delivering a concluding speech, Pierre Gramegna, Minister for Finance, expressed that we are still not fully understanding the width and depth of the BRI. He presented the long-term approach for the BRI, and added that the logistics, ICT and finance sectors will be key to the success of the initiative. Most importantly, the Minister noted that the importance of the BRI for the Chinese government was illustrated when the initiative was written in the constitution of the Communist Party of China at the National Congress last month. The BRI is a “generational matter”, and is here stay for the long-term.

The Minister also outlined that Luxembourg have a strong relationship with China, and a long-time friendship, noting his visits to China this year. He shared key insight into his engagement with the Chinese Finance Ministry, who have expressed they are eager to deepen cooperation in the implementation of the BRI, and that there will be continuing exchanges on the initiative. It was within this context that the Minister summarised that it is clear that Luxembourg will play an important role in the future success of the BRI, “not only for China and not only on the silk road, but also in Europe and in particular Luxembourg.”

The seminar concluded with a networking lunch, bringing together the speakers and participants, and offering an opportunity to continue discussions in an informal setting.

* Full Event Series: Throughout the course of the China's Belt & Road Initiative (BRI) Event Series (formerly referred to under the now less commonly used English translation of "One Belt One Road"), CHINALUX and the Chamber of Commerce of the Grand Duchy of Luxembourg have endeavored to introduce and explore the opportunities for Luxembourg under the initiative, with events following the launch highlighting opportunities and experiences in the Luxembourg logistics, ICT and finance sectors.

**Presentation Slides: Please email Bo Ji to request a copy of the slides for his presentation “Impact of Belt & Road Initiative to European Financial Sectors”: boji2025(at)gmail.com

Jeannot Erpelding, Director of International Affairs at the Chamber of Commerce of the Grand Duchy of Luxembourg, delivers his welcome speech.

Copyright: Chamber of Commerce of the Grand Duchy of Luxembourg 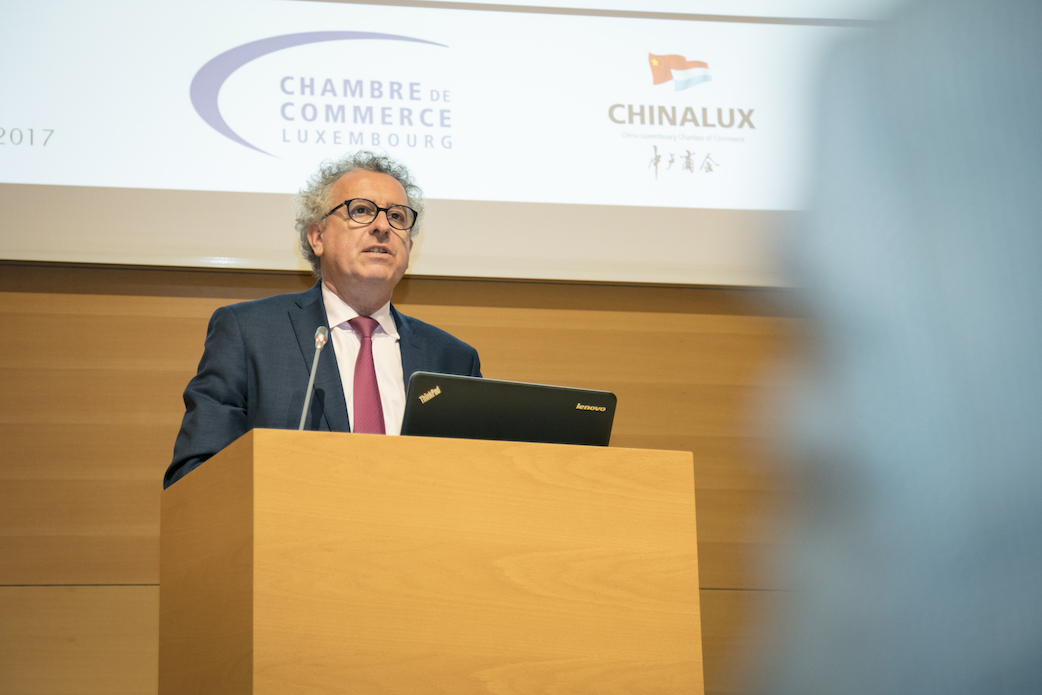